Behind the Scenes of the Abdication Crisis 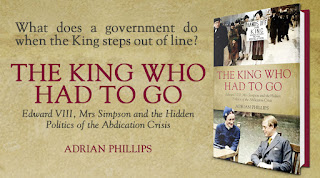 The crisis over Edward VIII had been bubbling below the surface since the start of his reign in January. As his behaviour with Mrs. Simpson became less and less discreet, concern grew at the highest level of government. When the new broke that Mrs. Simpson was seeking a divorce from her husband in mid-October, the horrible possibility opened itself that the King might want to marry her and make her his Queen.

The Prime Minister Stanley Baldwin came under pressure from government hardliners to act, but his first informal conversation with the King proved entirely inconclusive. When Mrs. Simpson failed to deliver on a vague agreement to leave the country after the divorce hearing, tension began to overflow.

The full, behind the scenes story of what happened next and the factors that drove the action, are told in my book The King Who Had To Go just published by Biteback at £25