Edward VIII Makes his First and Last Speech to Parliament 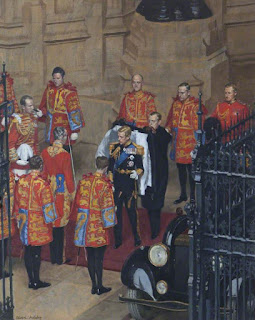 King Edward VIII opened Parliament for the first, and as it proved only time, accompanies by all the traditional ceremonial and flummery of the event. There was only one feature that distinguished the event from the others of the past generation and that had nothing to do with the King’s much vaunted passion for modernization. There was only one throne set in the House of Lords as there was no Queen to occupy a second one.

He was felt to have performed the duty well, giving full gravity to an antique ritual of the kind that insiders knew well that he despised. The contents of the speech was, of course, entirely the Prime Minister’s and attracted little interest. The King was merely a Constitutional mouthpiece, but like an actor, he was judged on performance. Few could have guess that in little more than a month, Parliament would be listening to a brief speech also composed in the King's name, but delivering a message of his own and one that shook the country.