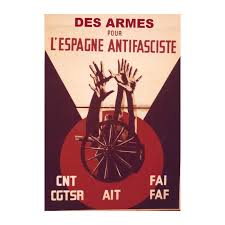 The fragile truce between the French Communist Party and Léon Blum’s Front Populaire government that had been cobbled together at the Radical Party congress at Biarritz broke, if it had ever really existed. As it had from the start, the initiative lay with the Communists.

The substances of the breach lay, once again, in Blum’s policy towards the Spanish Civil War – with a side swipe at the conversations with Hjalmar Schacht, head of the Reichsbank. Moscow had ordained that the Republicans should be fully supported so Blum was assailed directly Blum’s policy of non-intervention. Thorez, the Communist leader, stopped short of insisting on direct French intervention, but called loudly for the Republicans to have access to French weapons. It was easy work to manufacture an image of the Communists as the sole worthwhile opponents of Fascism and its allies.