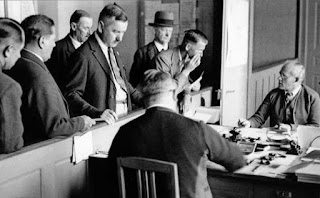 The minor economies of Europe were falling one-by-one in line with the tripartite agree between the British, French and US governments that had accompanies the massive devaluation of the French franc that had become inevitable because of the damage to confidence of the Front Populaire and its political travails. It was a broad but unspecific agreement to use financial resources to ward off instability.

In quick succession the Dutch and Swiss governments agreed to subscribe to the agreement and they were swiftly brought into the arrangements for technical cooperation on the foreign exchange markets, master-minded by the Bank of England. In those days the current global safe haven status of the Swiss franc was undreamed of and its central bank barely registered on the global scale. Switzerland had been shocked by the 30% devaluation of the Franc undertaken at the same time as devaluation of the French franc and there was little recognition that this was a major step to hauling the Swiss economy out of the slump.