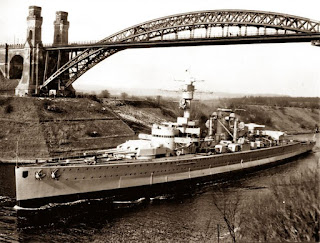 Nazi Germany took another step towards the complete repudiation of the Versailles Treaty.  The sixteen governments represented on the Commissions for the nation’s main inland waterways were simply told that these waterways were no longer subject to foreign control under the principle of Gleichberechtigung, or equal entitlement. They included the Kiel Canal between the North Sea and the Baltic.

The move was essentially symbolic. The Kiel Canal had been built in the heyday of Imperial Germany’s drive to build itself up as a naval power, giving it the means to move ships between the two main potential theatre of operations without the delay of sailing through the Skagerrak, but it had never lived up to its strategic purpose. The other waterways served essentially commercial purposes. Hitler’s move is barely remembered at all today. It is hard to find any book on the era in which it is mentioned but it gives a register a register of how much the western powers had resigned themselves to bowing to Hitler’s will.