Not Only Fascists Targeted by Public Order Bill 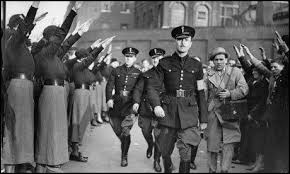 The second reading of the Public Order Bill in the House of Commons passed off smoothly. There was widespread acceptance of its key measure: the banning of political uniforms. Whilst this was not defined at all closely in the Bill, it was directed squarely at Sir Oswald Mosley’s British Union of Fascists. The Home Secretary, Sir John Simon, said directly that everyone knew what was meant by a political uniform. It gave the Bill the appearance of an anti Fascist measure, but this was not the full truth.

Some of the Bill’s other clauses had rather wider potential application. The Police’s powers to regulate demonstrations were increased. They were to be given authority to demand the names and addresses of protesters. Carrying offensive weapons was to be proscribed and the law against abusive or threatening language and provocative actions was to be extended across the country. Hitherto this had only been an offence in London under a quirky relic of decades gone by. All of these measures might be used just as well against counter-demonstrators at Fascist meetings. To many in the Police, Communists posed an equal or greater threat to public order than the Fascists.