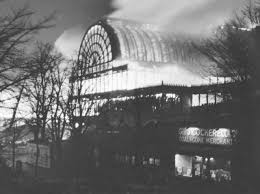 The Crystal Palace, which had been moved to Sydenham Hill after the Great Exhibition of 1851, was completely destroyed by fire that broke out at 7.30pm. It was never established precisely what caused the blaze, but given the amounts of flammable material present and the relatively dilapidated state of the building, it was probably an accident. Even the efforts of 436 firemen using 88 fire engines could not prevent total destruction. There were no casualties, even the birds in the Palace’s aviary escaped.

Prominently situated 100m higher than the Thames, the fire was visible across much of the London area. The pilot of a plane landing at Margate could see it. Huge numbers of people flocked to the area to witness the spectacle, including the Duke of Kent, who was lent a pair of fireman’s boots for his safety and comfort. The spectacular event seemed to mark a symbolic, final and ominous end to the certainties and optimism of the Victorian age.