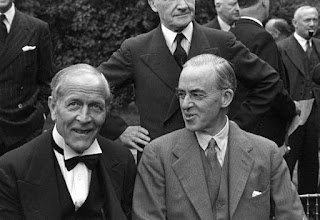 The Labour Party continued its gentle shift back towards the right of politics with moves on two high profile figures in the movement, one a readmittance and the other the  public censure of the extreme left-winger Sir Stafford Cripps. Readmitted was Sir William Jowitt, the former Solicitor General, who had been expelled when he joined Ramsay Macdonald’s National Government in 1931. This was essentially a symbolic act of reconciliation; Jowitt’s political career was fading although both he and Cripps were to sit in Attlee's Cabinet in 1945.

Of greater practical significance was the censure of Cripps for saying that if Germany defeated Britain in a capitalist war (whatever that was) it might be no bad thing for the British working class. He was also trying to promote a three-way “united front” between the Communist Party, the Socialist League - a constituent of the Labour Party in which Cripps was a prominent member – and the Independent Labour Party. It would foster “mass resistance” to rearmament, military recruitment and “regional pacts”, a code for any diplomatic alliance other than one with the Soviet Union. Cripps’s move appeared designed to undermine the support for rearmament by the Trades Union Congress, which was powerfully symbolized by the news that Sir Walter Citrine, the General Secretary, was to preside over a large, cross-party rally promoting rearmament at the Albert Hall.