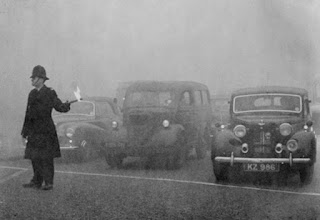 London and other area of Britain were gripped by the severe fogs, or more accurately, one of the smogs that were so common when coal fires were the near universal method of heating homes. These were the "pea-soupers" and a major health hazard as well as an inconvenience. London was especially vulnerable, lying low  in a large, shallow bowl of land with a major river running though it.

Traffic was brought to a near standstill. In 1936 the fog was so severe that flares had to be used to guide traffic. Practically the entire capital was affected, but the districts along the river suffered worst.