Awful Warning of the Perils of Divorce for Public Servants 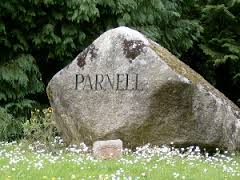 It was announced that Elsie Schauffler’s play about the nineteenth century Irish nationalist leader Charles Stewart Parnell was to be performed publicly in London at the New Theatre after a successful run in New York. It had already been performed privately at the Gate Theatre in April, but it had taken a battle of epic proportions with the Lord Chamberlain to win a license for a public performance. This ultra-conservative official of the Royal Court, who for purely historical reasons was the legal censor of the theatre, had demanded cuts in the text.

His particular objection was to the play’s suggestion that Parnell’s mistress, Kitty O’Shea, continued a sexual relationship with her husband once her affair with Parnell had begun. In the fifty years since scandal, not much had changed in British sexual morality. Parnell had been forced from politics,  when Captain O’Shea divorced his wife and involvement with a divorcee still spelled death for most careers in public service.