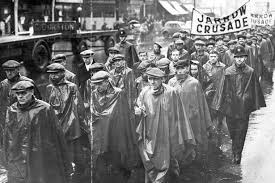 The Jarrow marchers reached central London after their 300 mile journey on foot. Of the 200 who had set out, only three dropped out on the way. The only woman in the group was the formidable Ellen Wilkinson, Labour MP for the constituency. The modern group statue with a woman carrying a baby and children at her side is a fiction. It rained torrentially for the last leg of the march, which contributed to a powerful historical image at the expense of their comfort. Wisely they did not use umbrellas.

The march created a powerful and lasting image of the effects of the depression, but had almost no contemporary political impact. The government maintained its refusal to meet the marchers although they were given tea at the House of Commons. A Communist attempt to slipstream on the publicity for the marchers with a demonstration in favour of arms for the Spanish Republicans was rebuffed.