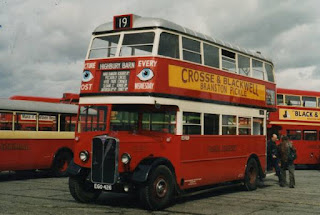 The London bus service was severely disrupted by a strike. As so often with labour disputes, the precise reason was obscure. Apparently it had been triggered by changes to how the 63 route was operated. Traffic was heavy on one section and light on another so the route was split into two, with appropriate adjustments to capacity. This involved a net increase in the number of men and vehicles employed, but it seems that the mere notion of change to schedules was enough to provoke discontent.

The London bus service was a key battleground for the confrontation between the Communist Party and the established trade unions. The Communists had taken advantage of a long tradition of militancy amongst bus workers - depicted in Graham Greene's It's a Battlefield - to build membership in the sector, but found that this was something of a wasting asset. It left them with a choice between backing quasi-spontaneous and largely futile action, or acting as disciplined trades unionists. The imperative to avoid open conflict with formidably anti-Communist figures such as Ernest Bevin, who would have been only too happy to take on the Party on such favourable terrain, usually won through.