Both Sides Bomb Civilians in Spain 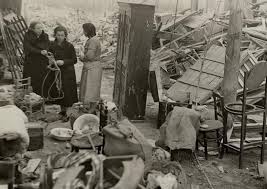 The Spanish Civil War saw the first widespread bombing of civilian targets. The relatively small size of the air forces initially deployed by both sides meant that cities did not suffer the devastation that they were soon to experience elsewhere in Europe. Each attack caused only a handful of casualties but in these early, innocent days they were reported extensively. An exact figure was even given for the number of bombs dropped.

The rebels bombed Madrid and Irun, which was under intense ground attack as well. The defenders of Irun were supposed to have devised a novel form of anti-aircraft defence by threatening to execute hostages including the local archbishop if bombing continued. Government aircraft bombed Seville, Cordoba, Granada and Cadiz.