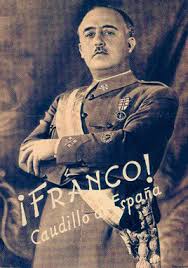 Francisco Franco was proclaimed as the supreme commander of the insurgent forces in the Spanish civil war by the junta at Burgos. As each front had operated more-or-less autonomously at the start of the war, this had not been a pressing question, but as the fronts stabilised, unified leadership was required. Franco would not have been the obvious first choice at the start of the uprising. The original designated leader General Sanjurjo had died in an air crash General Mola was a more prominent figure politically, but his credibility had suffered from what was seen as a botched coup and his closeness to the extreme Carlist and Falange movements.

Franco’s new prominence could be read in his attendance at a memorial for those who had fallen in the siege of Toledo led by the Archbishop of Toledo, who according to insurgent propaganda had remained with the cadets defending the Alcazar, somehow mysteriously escaping before it fell to the Republicans. In his speech afterwards Franco told the cadets they were “the pride of Spain. The old Alcazar is destroyed. We will build another. We are going to build a new Spain and an Empire”.