Uneven Struggle between Britain and Norway over Antarctic Whaling 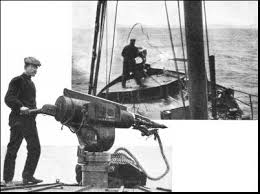 As if coping with the Soviet government’s complaints about Trotsky were not enough, Norway had to cope with a dispute with Britain over whaling in the Antarctic. Whaling was a major source of edible fats in those days and important economic issues were at stake. The as the only region left where whales were relatively abundant, having been hunted to near extinction elsewhere. Britain and Norway were the main participants in the trade, but their positions were uneven: Britain controlled the whaling bases, whilst Norway had th ships and the men.

The Antarctic dispute had reached something of a deadlock when the British whaling companies threatened to boycott Norwegian personnel for their operations. Norwegian whalers had a near monopoly of the skills required for the work and the British threat to train British seamen for the job had the ring of desperation.