A faction of young officers of the Japanese army, who advocated traditional culture and ultranationalism, attempted to stage a coup against  their slightly more conservative rivals. As well as seizing power they intended to kill seven senior politicians mainly because of their supoort for the London Naval Treaty, which was seen as an unacceptable constraint on Japanese military expansion. The plan was exceptional only in its scale and ambition. Political violence, including factional murders within the army, had been a feature of the preceding years.

The coup failed notably in the attempt to take over the Imperial Palace but the plotters did succeed in killing a number of their targets as well as other senior officials. Participants in the coup were pursued and punished in contrast to previous uprisings. This does not mean that the incident made Japan more stable or less of a threat to peace. In fact it served to strengthen the army's influence which became notably greater in the changes that accompanied the next government. The "2.26" incident was revered in the collective memory of right wing circles and featured in works by Yukio Mishima, the novelist and far right agitator, who commited seppuku after a futile attempt at a coup in 1970. 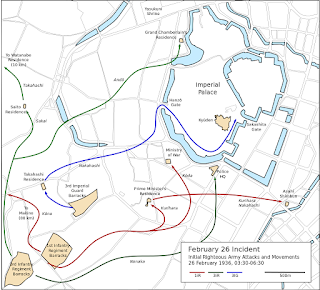