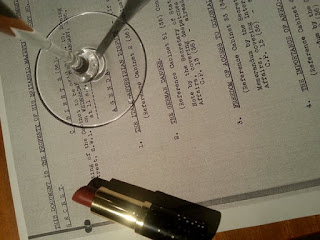 
Hardly had Edward begun his reign, when concern at his behaviour, in particular, the lax security with which he treated confidential official documents, made itself felt at the highest levels in Whitehall. His Private Secretary, Clive Wigram, was called to a conference with the three top mandarins in the country: Sir Maurice Hankey, Secretary to the Cabinet, Sir Warren Fisher, Head of the Civil Service, and Sir Robert Vansittart, Permanent Under Secretary at the Foreign Office. They had tried unavailingly to persuade Baldwin to take action but he had refused. They now wanted Wigram to intervene with his master.

Vansittart was worried that the King discussed his confidential papers with Mrs. Simpson and that she, it turn, was indiscreet. She was thought to be "in the pocket of the German Ambassador." When Wigram raised the question of the security of documents with the King, he was given the hardly comforting answer that the King read them in his car on the way to Fort Belvedere, possibly a secure environment, but hardly one conducive to careful consideration.