The international reaction to Anthony Eden's speech as Foreign Secretary in the House of Commons debate on foreign affairs was approving, in particular from both France and Germany. This was a sure sign that he had avoided taking a strong position on anything of importance in line with the government's generally entirely passive approach to diplomacy.

The French were pleased that Eden indicated that an oil embargo against Italy would not be pursued vigorously. In turn the desire not to upset Italy reflected France's own lack of policy. For their part the Germans were happy that Eden expressed confidence in "collective security" and appeared to disavow what was labelled as the "encirclement" by Germany. It was comforting to the Nazi regime that Britain should cling to the delusion that the League of Nations offered any constraint on its ambitions and not attempt to construct a system of alliances as an alternative. 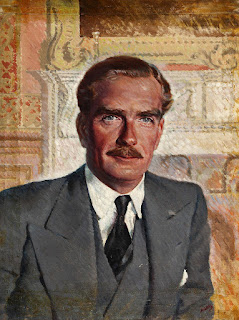