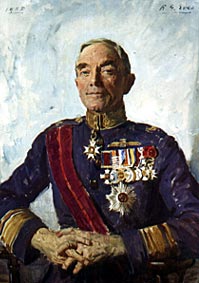 
Among the King's official visitors was Air-Vice Marshal Sir Philip Game, Commissioner of the Metropolitan Police. They probably discussed the security arrangements at George V's funeral, which had caused Edward momentary but deep and lasting anguish on the day. Edward believed that it was because of a failure by the police that his father's coffin had been put at risk.

It is unlikely that Game gave any hint that Edward's indiscretions had made him vulnerable on a quite different score. The previous year the Metropolitan Police Special Branch had investigated the affairs of Mrs. Wallis Simpson, the dominant figure in the the Prince of Wales's private life, and her husband, Ernest.

The detectives had come back reports of a squalid and compromised relationship. Mrs. Simpson was fond of men, but was mainly after the Prince's money, some of which she lavished on a secret lover, Guy Trundle. Ernest Simpson expected to be given a peerage as a reward for his complaisance.