The Royal Crown, Legend And Continuity 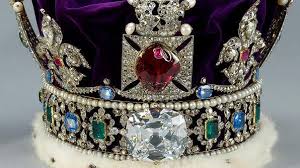 
The Society of Antiquaries was treated to a learned talk by Mr. M. R. Holmes on the "Crowns of England." He was anxious to dispel the many misunderstandings and legends on the subject that had developed over the years, in particular the belief that every monarch had been crowned with the same crown apart from a regrettable  interval in the middle of the sixteenth century. Mr. Holmes deplored the "heresy" which had led to the destruction of the Regalia at that period.  He was not so crass as to mention the Revolution or the Protectorate by name. Such aberrations did not deserve the attention of polite society. Unspoken was also the ugly possibility that misguided individuals might explore the idea of repeating them.

He gave some attention to one happy element of continuity between crowns from either side of this unfortunate period: the presence of the irregularly shaped spinel (long thought to be a ruby) that Pedro the Cruel had given to the Black Prince in the middle of the 14th century. Here again, Mr. Holmes had to lay to rest a ludicrous superstition, namely that it had been sold for a mere £4 in 1649. In reality it had attracted a far higher price.