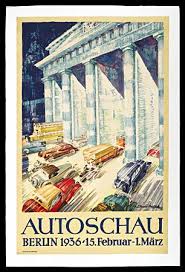 
Adolf Hitler opened the International Motor Show in Berlin. By a process of rather twisted logic he managed to slip a plug for the "People's Car" into his usual complaint that Germany lacked living space (Lebensraum). He also contrived some unsubtle vegetarian propaganda. Germany could not produce enough food, notably livestock, so if people eliminated any food consumption that was not absolutely necessary and spent their money on things that Germany could produce (like a People's Car) all would be well.

More ominously he reported that experiments by the Wehrmacht had been successful and synthetic rubber tyres were now a practical proposition. As Germany had no rubber-growing colonies, the strategic implications were clear. As well as the military, the German Post Office had place substantial orders for the new "Buna" tyres with I. G. Farben of future infamy.