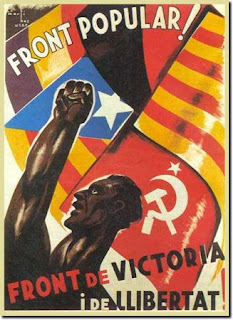 
A general election in Spain produced a narrow majority in favour of the alliance of left wing parties, the Front Popular, largely reversing the right wing victory in 1933. The existing government hung on in a minority administration. Spain had suffered more than a decade of political instability and this was yet another step towards civil war. King Alfonso XIII had fled the country in 1931 to join the ranks of Europe's ex-monarchs, which had been greatly swelled in the aftermath of the First World War. This usehered  in the second Spanish Republic, but monarchism remained a potent force along with many other violent shades of opinion, notably Communism and Falangism, the home-grown Spanish version of Fascism.