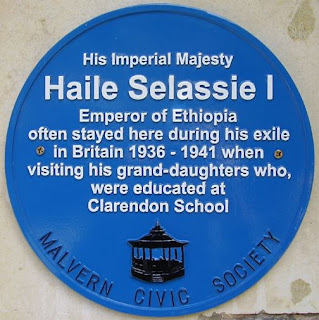 Haile Selassie arrived in the UK to begin what proved to be a five year exile. He received an enthusiastic reception from thousands of Londoners. It might have offered a small consolation for Britain's failure to come up with any worthwhile attempt to halt the Italian invasion.

Close readers of the Court Circular might, however, have noticed one thing that was missing. The King did not receive Haile Selassie at Buckingham Palace or anywhere else. As he was the legitimate sovereign of a friendly country who had been deposed with no trace of legality, it was a pointed snub. In fact the Foreign Secretary had suggested that it would be popular for the King to receive him. This would also have signalled to Italy Britain's refusal to acquiesce in its invasion. The King refused; "Popular with whom? Certainly not the Italians." The Negus had to content himself with an informal call from the Duke of Gloucester, one of the King's younger brothers.