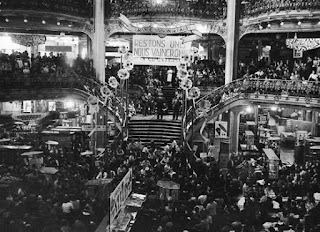 Leon Blum's left wing government finally took office after a prolonged period of negotiations. His ministry was striking for the presence of three women, including the daughter of the scientist, Marie Curie. Otherwise it was chiefly noteworthy for its absences. The heaviest hitter was Edouard Daladier, who had twice been Prime Minister albeit for terms of only nine months and ten days respectively. Yves Delbos, the Minister of Foreign Affairs, was a former journalist with little ministerial experience. The Communists did not participate.

Its first priority was to deal with the massive industrial unrest that had developed to a large extent spontaneously. Many factories were occupied by their workers on sit-down strikes. Even Parisian department stores were affected. The new government was sympathetic to the workers' demands but unsettled by a movement that appeared out of control. The Minister for the Interior, Roger Salengro, promised simultaneously legislation to settle workers' grievances and tough action against disorder.