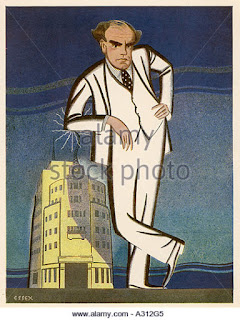 The government finally announced what it actually intended to do with the BBC on the basis of the Ullswater report which had been been grinding its way through the political process since 1935. The answer was rather little and what little was to be done was favourable to the BBC. Sir John Reith was being rewarded for good behaviour in the stewardship of what was, to a large extent, his creation.

The term of its charter was extended by ten years and its share of the license fee pushed up to 75% with the possibility of more if it needed more money for Empire and television broadcasting. the number of governors was increased to seven with a one-third rise in their pay to £1,000 per year. Quangocracy is not a recent development.  Reith won a partial victory in his drive to exterminate the  hated private sector relay exchanges. Their licenses were extended for three years, but the Post Office was to begin experimental work to replace or absorb them. The idea of giving a senior minister responsibility for the BBC's cultural side (whatever that meant) was dropped and the lowly Postmaster General kept authority over the whole show.