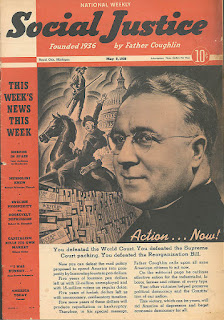 The Democratic Party Congress in Philadelphia nominated President Roosevelt as its candidate for the the presidential election in November. He was the only contender. His selection had been a foregone conclusion for months, but there was still enormous enthusiasm at the prospect. There were 110,000 to listen to his acceptance speech.

Few doubted either that he would beat the Republican Candidate, Governor Alf Landon, in the election itself. Landon was a lacklustre campaigner. Apart from his eventual defeat by Roosevelt, he is little remembered although he did live to the age of 100. His weakness attracted a third party to enter the contest, the Union party, led by North Dakota Congressman William Lemke, who announced his a rigorously protectionist platform on the same day. Lemke was backed by Father Charles Coughlin, the virulently anti-semitic "radio priest."