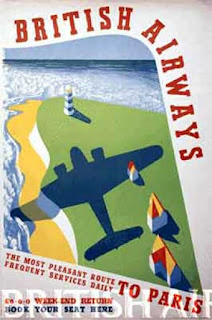 The air minister Lord Swinton opened London's new aerodrome at Gatwick. It had been chosen by the newly created British Airways as its main base. British Airways had been formed at the start of the year by the merger of a number of smaller airlines and was being subsidized to develop routes in northern Europe. Gatwick did not prove a success as the ground became water-logged and British Airways transferred to Croydon aerodrome early the following year.

Unpatriotically British Airways  used American built Lockheed Electra airliners, one of which flew Neville Chamberlain to Munich in 1938. In 1940 British Airways was absorbed by Imperial Airways, the British flag-carrier, and the name vanished until 1974 when it was resurrected for the airline that included all of the nationalized companies.