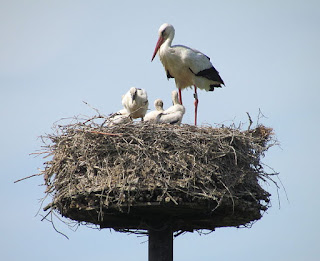 In an attempt to reintroduce storks to Britain Germany presented 23 young birds, which arrived by Lufthansa at Croydon aerodrome. They were welcomed with a tasty meal of rabbits and fish. This followed on from a largely unsuccessful attempt to place stork eggs in herons' nests in the hope that they would be incubated. The last time that storks had bred in the wild in the UK was in 1416.

The letter covering the gift from Dr. Schuetz, of the bird care organisation of East Prussia, made a point of saying how reluctant the local peasants had been to lose the storks and requested that they be kept in touch with the progress of the birds which had been ringed for tracing purposes. Dr. Schuetz assured his correspondent that letters with news might be written in English as there was someone in each village who could translate.