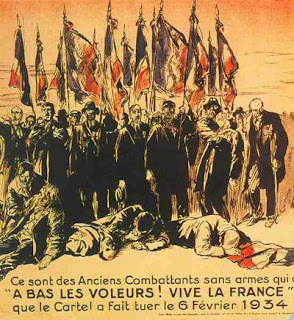 Leon Blum's Front Populaire left wing government in France was slowly surmounting its first hurdles. The day before it has secured  parliamentary approval by a large majority (in line with the result of the election) for a very detailed programme of reform which included a 40-hour working week and other measures for which the unions had been pushing. Blum had a comfortable parliamentary position but he faced virulent opposition, notably from the extreme right wing anti-semites of Croix du Feu such as the deputy Xavier Vallat, who deplored the fact that this "old gallo-roman country should be ruled by a Jew."

Organized labour also decided to show solidarity with the Front Populaire now that their main demands - collective bargaining and the nationalization of war industries - had been met and backed away from the outright confrontation with employers of the last few weeks. But this came at a price. Wages were to rise by 7% to 15%. Strikes were also continuing in the less biddable and more fracture dsegments such as the newspaper industry, the tailoring trade and sleeping car attendants.