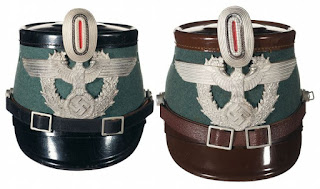 Germany took two steps towards integrating the civilian police force into the monolithic Nazi state. One was practical and the other was symbolic.

Hitler approved new uniforms for the police on a national level. All regional differences disappeared. More important, a military field grey colour replaced the dark blue that was supposedly a relic of allied military occupation in the wake of the First World War. Inevitably the Swastika featured prominently.

Heinrich Himmler, who had controlled the secret police as well as the SS, took charge of the police as well. This was under the nominal supervision of the interior minister, Wilhelm Frick, an early star of Nazism at national political level but already heading towards comparative insignificance.