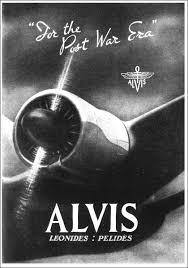 The Alvis company of Coventry opened its aero-engine factory. This was one of the first shadow factories, key to Britain's rearmament programme, and Alvis's first major step away from motor-car manufacture. The factory was a major addition to production capacity for high-power engines, but in other respects it was something of a dead-end.

It began by producing Mistral radial engines under license from the French Gnome-Rhone company. At that point the Bristol Motor company had something of a monopoly in radial aero-engine in Britain and Alvis hoped to develop its won engines in competition.and developed its own Pelides motor from the Mistral. By the outbreak of the War, the Pelides was not fully developed and established designs had priority. The Alvis factory was one of the key targets for the Lufwaffe, when it bombed Coventry in November 1940. The car factory was badly hit, but the aero-engine plant escaped almost unscathed.