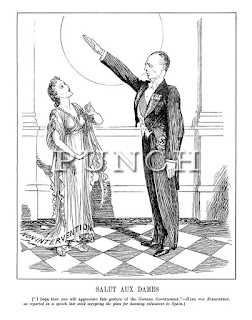 The new German ambassador to London and successor to Leopold von Hoesch, who had died in office, was announced. It was not to be another professional diplomat, still less an old-style aristocrat like von Hoesch, but the Nazi politician, Joachim von Ribbentrop, arguably the most stupid and worthless of the party's senior figures, albeit cultivated and cosmopolitan in comparison to his colleagues.

Von Ribbentrop had already spent much time in London, negotiating the Anglo-German Naval Treaty of 1935 and cultivating the higher reaches of cafe society, in particular Lady Cunard. Lady Cunard  had been an early sponsor of  Mrs. Simpson's rise in society and much of von Ribbentrop's hopes for his mission rested on exploiting the connection to Edward VIII to promote good relations between Britain and Nazi Germany. He wildly exaggerated the strength of his relationship with the King, the King's enthusiasm for his regime and the King's influence on government policy. Von Ribbentrop's numerous gaffes soon earned him the nickname in British society "von Brickendrop".