Tibet Has a New Dalai Lama 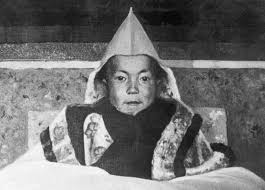 The new and still today current Dalai Lama was identified in Tibet. His predecessor had died in December 1933 and according to Tibetan belief his spirit had transferred to a child born at the exact moment of his death. Given the size of Tibet it had taken some time to collect all the possible children and examine them for the bodily marks that proved his status.

The return to Tibet of the Tashi Lama, second in the hierarchy to the Dalai Lama, from China, where he had been in exile since 1925 following disagreements with the late Dalai Lama, had added further complexity. The Tashi Lama was suspected to pro-Chinese inclinations. For the time being the new, infant Dalai Lama was being kept in a place of secrecy.