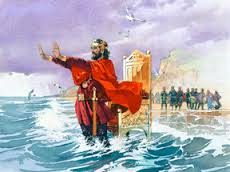 The French National Assembly voted through the Government's bill to control prices.It was a desperate and futile move to avoid the economic consequences of the Matignon agreement, which had granted huge wage increases as well as workers' rights. The bill was presented as a measure  to prevent predatory and illicit price increase by shopkeepers, but the in reality inflation was now running at a gigantic rate. In the last week of July wholesale prices had risen by 2%, even before the full effects of Matignon made themselves felt.

In an extraordinarily muddled piece of economic thinking, the Government tried to pass off the recent measure, easing credit terms for small businesses, as a means of financing the increase in their costs. Even more desperate was a mooted moratorium on overdue rent and interest arrears. The whole being temporary until December, when comprehensive legislation would have been introduced.