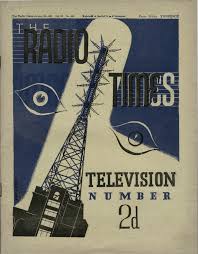 The fist ever television programmes in Britain , as opposed to tests, were aired at the Olympia Radio exhibition.  They began with a watching eye shown on screen with accompanying music to allow the system to be adjusted before the public was admitted at noon. Two one and a half programmes daily were sent out by the BBC's transmitter at Alexandra Palace.

The programmes featured light entertainment items, such as the Three Admirals close harmony group, tap-dancing and humour in the shape of the Griffith Brothers comedy horse "Pogo." More heavyweight culture was represented by "Cover to Cover" with Somerset Maugham, Julian Huxley, "Sapper", T.S . Eliot, Rebecca West and A. P Herbert. The Gaumont British News covered the current affairs base.