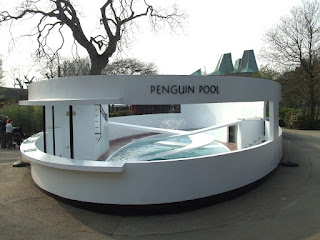 Visitors to London Zoo were treated to their first ever view of a King Penguin, incubating its solitary egg. No form of nest was built as no material was available in the birds' normal Antarctic habitat, but the egg was supported on the bird's webbed feet to protect it from the cold of the ground.

The first King Penguin had arrived at London Zoo from the Falkland Islands as long ago as 1865. Its penguins were housed in a special enclosure with dramatic ramps opened in 1934, designed by the Russian architect Berthold Lubetkin, of the Tecton Movement. When the penguins were given the opportunity to show a preference in 2004, when they were temporarily housed in a duck pond during the renovation of Lubetkin's enclosure, they showed such a an affection for the less architecturally distinguished surroundings that they remain there to this day.