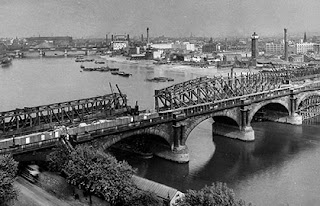 Waterloo Bridge had been closed earlier in the year, because it had fallen beyond repair. John Rennie's Greek Doric Bridge of 1817 was an architectural triumph, but not durable enough and The old bridge was demolished and it would take some years to build the new one. This helped focus the attention of London's traffic planners on the need for a new road bridge over the Thames in central London. They cast an envious eye towards Paris, where there were 25 bridges over the Seine compared to London's twelve and the far more thorough approach to creating new roads to feed them.

An advisory committee recommended a new bridge at Charing Cross, but London Transport was concerned that without major changes to the road-system that fed it, it would cause as much congestion as it aimed to remove. It would entail a massive rejig of bus routes as well It was never built.