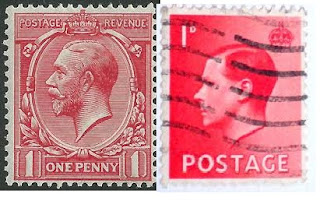 The designs for the first four postage stamps of the reign of Edward VIII were announced by the Assistant Postmaster General. Designs for the remaining denominations of postage stamp had not been set and it was suggested that the public reaction to the first four might be the deciding factor. This strange access of openness towards public opinion may have masked hopes of a successful  rearguard action by the forces of conservatism.

The designs were markedly more modern than those of  George V stamps and set the style for standard British stamps ever since. They did resemble George V stamps in what was actually a shocking and scandalous innovation. Like his father's, Edward's head faced to the left, in breach of the wholly inexplicable, but iron, tradition that the orientation of the monarch's head should alternate between reigns. Edward believed that his left profile was more flattering and had bitterly resisted following this practice for both coins and stamps. He beat the Post Office but the Royal Mint escape having to issue coins tainted by this blasphemy.