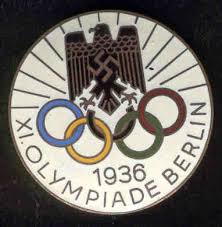 The opening of the Summer Olympic games was a Nazi propaganda event. The 100,00 seat Olympia stadium had been built as a demonstration of the might of Nazi Germany. Leni Riefenstahl, who had directed the movie Triumph of the Will celebrating the Nazi Party rally of 1934 in Nuremberg, had been commissioned to make a film of the Olympics and the result, Olympia, has provided potent images of Nazi triumphalism ever since.

The ceremony opened with Hitler's arrival in orchestrated silence, when he was handed a bouquet of flowers by a small girl. Before the teams marched in, Deutschland Ueber Alles and the Nazi party anthem, the Horst Wessel Lied, were sung. In the evening the stadium provided the backdrop to a floodlit "Festival of Youth" and Berlin was given over to even more blatant political displays.