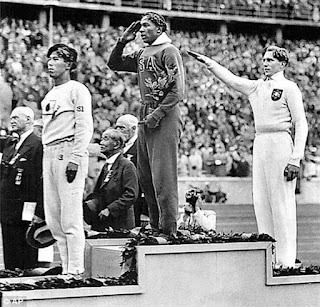 Black American athlete Jesse Owens won his fourth gold medal of the Olympic Games in Berlin with victory in the 4 x 100 metres relay, setting a new world record. He had already won gold in the 100 metres, long jump, defeating Germany's Lutz Long, and 200 metres. His achievement has since been encrusted by legend; much of it dubious.

It was doubtless an embarrassment for the Nazis to see a black athlete beat aryans, but the story that Hitler stormed out of the stadium is unverified and the story that he refused to shake Owens's hand is even more dubious. It is certainly true that two Jewish runners (the only Jews in the US squad) were dropped from the team in favour of Owens and another black athlete at the last moment, and it is an open question whether this was motivated by a desire to save the Germans the humiliation of losing to Jewish athletes or outright anti-semitism on the part of US team officials..