Talks About Talks Amongst Indian Princes 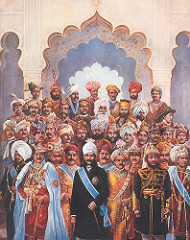 Even the very limited measures for autonomy that the government proposed to introduce  in India had to struggle with the immense complexities of local politics. A key part of the British Raj's structure was the role of independent Princes who had long retained a very considerable degree of local authority, albeit on traditional terms, in practice hereditary and absolute monarchy. They were as little interested in a national, open democracy as the most reactionary of the British.

The number of the minor Princes had pushed hard to use the negotiations to rebuild their own position within the Chamber of Princes, the body through which their collective interest (if such a thing existed) was represented across the sub-continent. The Viceroy proposed a basis for talks to secure some kind of unanimity. It was set to be a long process.