True Home of the Spitfire 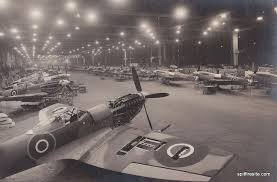 Work on what could arguably be described as the most important of the shadow factories created to extent Britain’s aircraft making capacity got fully under way. Near to its main car plant at the Longbridge suburb of Birmingham, the Austin Motor Company was beginning work on a 25 acre site. It was due to enter production in July the following year, a remarkably short lead time.

The factory was not yet referred to as the Castle Bromwich plant, as it later became famous. It was to be the main production site for the Spitfire through the Second World War. It was not immune to German raids but was a far more distant target than Supermarine’s Southampton plant, where Spitfire production began. Much is made of Britain’s unpreparedness for war, but the shadow factory programme contributed the industrial depth that gave it superiority in production efficiency when the time came.