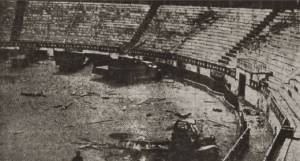 The Spanish rebel forces under Colonel Yague had stormed the city of Badajoz on Friday evening and now set to punish its population for supporting the government. Colonel Yague's forces were a combination of Moroccan Foreign Legionnaires and local Falangists. some units suffered heavy casualties in the hard fighting , but overall rebel losses were moderate.

Some if the defending troops wisely defected to the attackers, but most others were killed out of hand. The rebels massacred some thousands of civilians, figures range between 1,800 and 4,000. Many were machine-gunned in the town's bullring. Predictably, Yague came to be known as the "Butcher of Badajoz" and went on to become one of the rebels' most effective soldiers.