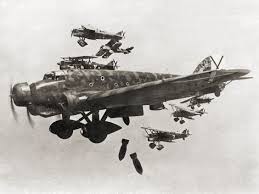 France's dream of non-intervention in the Spanish Civil War soon proved to be entirely one-sided. Having enunciated the policy unilaterally, its first diplomatic move was to approach Britain and Italy to join in. The democracies held back from supporting a Republican regime, tainted by atrocity and far left forces, but the Fascist powers had no such qualms about supporting the rebels.

Italy gave a rapid foretaste of its actual intentions by dispatching 21 military aircraft to the rebel military in Spanish Morocco. Three crashed en route in French territory, but the remainder arrived safely, beginning the long chapter of Fascist air assistance to the rebels. The surviving crews of the crashed aircraft were formally charged with arms supply and air navigation offences, but the fact that they were permitted to attend the funerals of those comrades who had lost their lives, points to the underlying sympathies of the French colonial authorities.