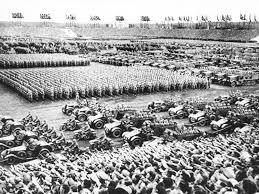 The tensions set loose by the Spanish Civil War provided Germany with a pretext for a step which would doubtless have been made anyway. The period of compulsory military service was doubled to two years, which would boost the size of the serving armed forces by about one third to an estimated 550,000. Call-up of all reserves would bring strength to 800,000 About half of the conscripts currently serving had volunteered to serve the extra year, which suggests that the measure had been prepared in advance.

The move was presented as necessary to counter Bolshevism exemplified by Russian meddling in Spain. Czech refusal to enter a non-aggression pact with Germany and a visit to the chief of the Polish general staff by his French opposite number were also cited. In reality the end of the Berlin Olympic games which freed Germany from some necessity to present itself as a peaceful nation, more likely the determined the timing.