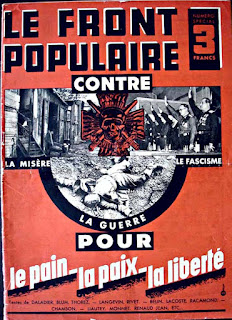 The first round of the French legislative elections showed a powerful swing in favour of the left-wing Front Populaire. For the first time the French Communist Party had allied itself with the Socialists under Leon Blum and it looked as though the strategy was paying off. It came second in a large number of constituencies and was well-placed to win them provided that the Socialist candidate respected the agreemnt and stood down for the second round.

With polls required in two-thirds of constituencies nothing would sure until the following week but crude arithmetic suggested that there would be a change of government. Economic problems and uncertain diplomacy had weakend the appeal of Prime Minister Sarraut and his pre-election broadcast declaring that old-fashioned liberalism was dead had not helped.