The King Indulges In Nostalgia 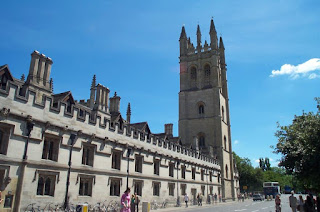 The King played a surprise visit to Magdalen College Oxford where he had been a student. He had happened to be motoring in the area with friends and, apparently on a whim, took them to see where he had studied much as any alumnus might have done. They saw the staircase on which he had lived but not his rooms. The most senior member of the college's hierarchy the party met was the under-porter. The journalist who reported the story tactfully claimed that as it was the vacation, the President and Fellows were not present to receive the King. He would not have wanted the pomp and ceremony that this would have entailed.

The journalist was similarly discreet as to the identity of the King's friends. He spent that week-end at Lord Dudley's home Himley Hall where Ernest and Wallis Simpson also stayed. At one level the story was a pleasant illustration of the King's easy-going informality, at another level it might have come perilously close to breaking the British newspapers' absolute taboo on reporting his relationship with Mrs. Simpson in any way.