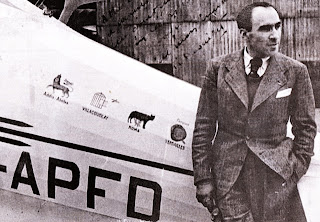 Free booting French aviator René Trouillet landed at a military airfield near Rome after a mysteriously easy escape from Villacoublay in France where the plane he was flying had been impounded by the legal authorities. It was a modern and expensive Beechcraft Staggerwing that he had bought for Haile Selassie, Emperor of Abyssinia, with sacks of silver that the Negus had given him in Addis Ababa the previous year. Trouillet styled himself the Negus's aviation adviser.

Even more mysteriously Trouillet was well-received in Italy, which was in the final throes of invading Abyssinia.  The suspicion grew that he had agreed with the Italians to take the Negus up for a test flight and deliver him into their hands, with the tacit approval of the French authorities, still keen not to alienate Mussolini and force him into Hitler's arms. In the event the invasion of Abyssinia moved too fast and Trouillet never returned there but he did keep possession of the Beechcraft. The logos painted on its fuselage summarize Trouillet's adventures.