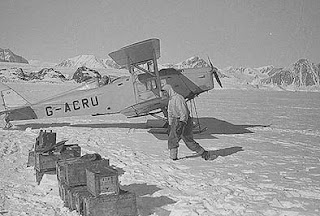 Word reached London that Graham Land was not as previously thought to be an island or archipelago but was attached to the Antarctic continent by a permanent ice mass. As a single island it would have been the second largest in the world other than continents. It still bears the name of Graham Land but is now classed as being part of the Antarctic Peninsula. The Casey Strait, the body of water which supposedly separated Graham Land from Antarctica did not exist. The reaction of Major R.G. Casey, distinguished Australian soldier and politician, after whom the Strait was named was not recorded.

The British Graham Land expedition of 1934-7 was poorly funded and used a three-masted sailing ship, the Penola. However the survey which established that Graham Land was not an island was conducted by air. It was a far cry from the days of Captain Scott although the aeroplane used was a de Havilland Fox Moth with an open cockpit.