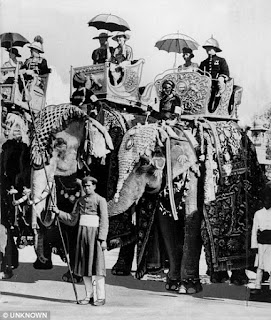 Lord Linlithgow the new Viceroy arrived in India. His first task would be to implement the reform of India's government decided in Britain after much political acrimony the previous year. Winston Churchill had fought bitterly against any dilution of Britain's untrammelled power in one of the defining acts of his yeas in the political wilderness.The scheme involved a degree of regional autonomy subject to "special responsibilities" vested in the governors appointed by London, in practice a veto. Without the agreement of Mahatma Gandhi and the Congress Party it would be a dead letter.

The British government had high hope of persuading the new King to make the journey to India. His father's triumph at the Imperial Durbar of 1911 had sent a striking signal of the supposed permanency of Britain in India. It was hoped that a Royal visit would reinforce the prestige off Britain and bind the local rulers more closely to the system. The King had hated his journey to India as Prince of Wales and was deeply reluctant.